It all began with a Christmas music box, from the Erzgebirge region, as a gift for the founders American friends. The business idea grew out of a love for a traditional Christmas, in harmony with an enthusiasm for preserving
customs and the associated craftsmanship and the desire to share this internationally.

The Gift that Blessed the Giver 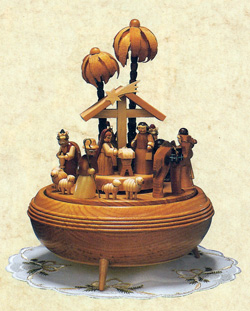 The music box held a particular fascination for an American officer’s family, who were friends of the Wohlfahrt family and visited them for Christmas in 1963. Wilhelm Wohlfahrt thought to himself that such a music box would be exactly the right present for his American friends and after Christmas went looking for another example. But all the shops had already put their Christmas goods back into storage. It wasn't until February of the following year that he found a wholesaler who was still selling the music boxes. However the wholesaler wouldn't supply him, unless he bought at least 10. Nevertheless, Wilhelm decided to buy, and gave a music box to his American friends, who were extremely happy about this post-Christmas present

Christmas Bazaars at the Military Base 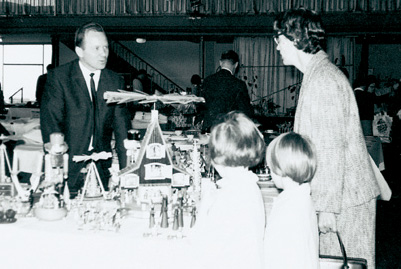 Wilhelm Wohlfahrt went from house to house in the American barracks to sell the other nine music boxes he had purchased from the wholesaler. He was successful at first until the military police took him into custody, because door-to-door selling was not allowed. But the military policemen also liked the music boxes and they recommended that he sell them to the American officers’ wives at the charity bazaars. From then on, Wilhelm and Käthe were at every weekend bazaar until 1964. 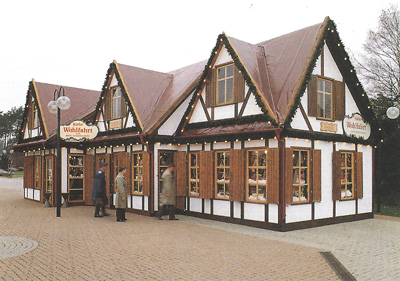 To keep up with demand, in 1967 the family opened a showroom in their house for military shopping tours and eventually added these "Christmas Cottages" seasonally to all the major U.S. military shopping centers in Germany. 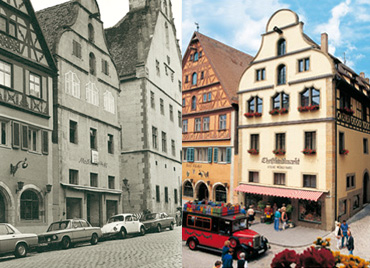 Because Wilhelm Wohlfahrt was at that time still employed by a well-known computer manufacturer, his wife Käthe Wohlfahrt gave her name to the new company. Business was going well and soon Wilhelm and Käthe Wohlfahrt were able to welcome the first customers to their own showrooms in Herrenberg near Stuttgart.

In 1977 they moved to Rothenburg ob der Tauber, a milestone in the company’s history. Here, on Herrngasse, the first specialty shop for Christmas items opened – Käthe Wohlfahrt’s Christkindlmarkt. The extensive range of Christmas music boxes from the Erzgebirge also included a successor model of the Nativity music box that Wilhelm Wohlfahrt had given to his American friends. Since then, Käthe Wohlfahrt has opened more Christmas shops, including the world-renowned Christmas Village in Rothenburg ob der Tauber. The town also became the location of the company’s headquarters. 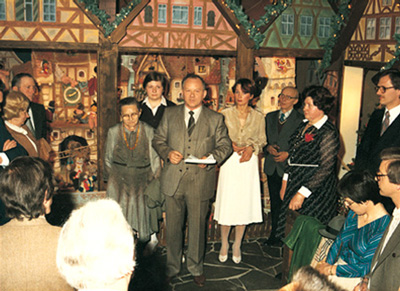 Opened in 1981, and located in the center of Rothenburg ob der Tauber is the Kathe Wohlfahrt "Weihnachtsdorf", the Christmas Village. Set up as a Franconian village market with a towering 18-foot revolving Christmas tree in its center and a 13-foot nutcracker welcoming guests, the Christmas Village brings to life the vision of its founders, Wilhelm and Käthe Wohlfahrt. Here, people from around the world can shop for exceptional and unique Christmas items all year round and appreciate the fine German craftsmanship that goes into every Käthe Wohlfahrt product. 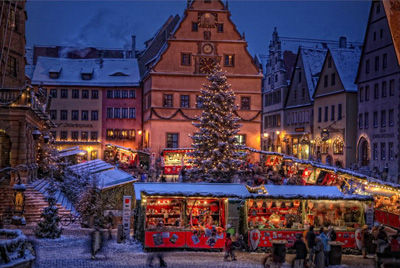 There is nothing so awe-inspiring in the pre-Christmas time as visiting Christkindlmarkt, the German Christmas market. Every town has its own little "Christkindlmarkt", which is a market-fest, where people gather to enjoy the Christmas time. These Christmas markets offer baked goods, sweets and toys and feature local and regional specialties. Larger cities like Frankfurt or Nuremberg have large Christmas markets, and attract many tourists, both local and foreign. They open before the first Sunday of Advent, around the time of Thanksgiving in the U.S., and usually continue until December 24th at 12 noon. Little booths are lined up, and sell everything from hand-made ornaments to musical clocks - playing slow, sad-sounding Christmas tunes.

In 1990 the Leipzig Christmas market was completely organized and held on the market square in front of the old town hall for the first time by Käthe Wohlfahrt in cooperation with the local market authorities. Käthe Wohlfahrt was already a coveted partner for Christmas markets before reunification due to its unique range and it also built up its seasonal presence throughout Germany and the world in subsequent years. Today the family company is represented at approximately 50 Christmas markets in Germany alone.

The "The "Christmas Express" Is an icon for the Käthe Wohlfahrt stores and is one of the most photographed items over the past 20 years. 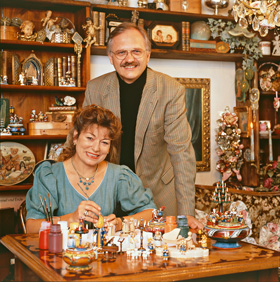 Harald Wohlfahrt had long dreamed of having his own products developed and produced. He laid the foundation for a small Käthe Wohlfahrt artists’ workshop in 1982. After reunification in 1989 Harald Wohlfahrt contacted toy makers in the Erzgebirge region to turn his long-cherished ideas into reality. The new series of turned figurines was supposed to be more detailed and delicate than ever before.

He met the artist Gudrun Galler, from Ainring, at an exhibition. With her creativity and expertise he had found the ideal partner in her. She managed to present the masterpieces so that he was immediately impressed and the artist created the first figurines and music boxes according to his ideas.

As a result the “Children’s Dreams” LIMITED EDITION from Käthe Wohlfahrt was born, whose first figurines saw the light of day and went on sale in 1990. 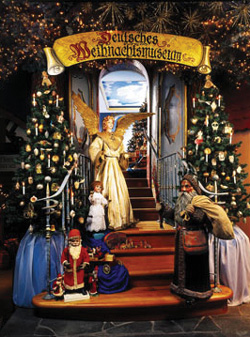 Once upon a time … would be the perfect way to start the story of the magnificent history of the origins of the German Christmas Museum. Shortly after the grand opening of the world famous "Weihnachtsdorfes", the Christmas Village of Käthe Wohlfahrt in Rothenburg ob der Tauber in 1981, Harald Wohlfahrt first started to contemplate about traditional Christmas celebrations during the era of our forefathers.

Based on the thought that the various facets of this traditional celebration and the historical development are worth being documented, his wish to create a Christmas museum was born. This museum was not only supposed to present wonderful old Christmas decorations from Germany, but also the history of this festivity and its secular customs for all visitors interested in learning more about Christmas.The German Christmas Museum in Rothenburg ob der Tauber effectively bridges Christmas history from the 4th to the 20th Century, offering the visitor a fascinating view of the historical development of Christmas celebration. The Christmas Museum is a dedicated tribute to the traditions of Christmas and the first permanent exhibit of its kind.