About Kathe Wohlfahrt of America

Welcome to Käthe Wohlfahrt of America, the premier source of German inspired and finely crafted holiday and seasonal décor items. Whether it's Valentines Day, Easter, May Day, Fathers Day, Oktoberfest or Christmas, we have something for every occasion. Many of the items we offer, such as Nutcrackers, Incense Smokers, Pyramids and Ornaments reflect traditional German handicraft and skills that have flourished in the Erzgebirge (Ore Mountains) of Germany for well over 200 years. Since 2001, Kathe Wohlfahrt of America has offered its exclusive products to North American audiences through its website, at its brick-and-mortar store in Stillwater, Minnesota, and in 2019 at 9 seasonal Christmas Markets in the U.S and Canada.

The new Fascination Home Collection showcases holiday decor items, souvenirs, & many other specialties from around the world. Many items in the collection have a country of origin from outside of the EU and if applicable, the country of origin is denoted for the product under additional information. 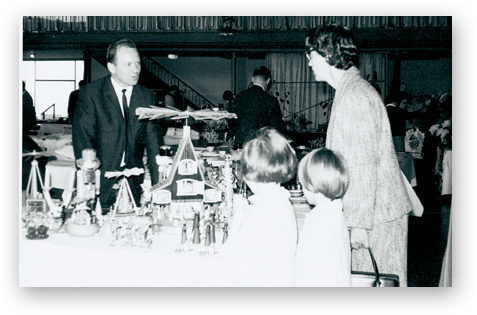 A music box that the founding couple Wilhelm and Käthe Wohlfahrt brought from their Saxonian homeland to Stuttgart laid the foundation for the company Käthe Wohlfahrt. The music box was of particular fascination for an American officer's family, who were friends of the Wohlfahrt family and who had visited them for Christmas celebrations in 1963. After the Holidays, Wilhelm thought to himself that a music box would be exactly the right present for his American friends and so he went looking for a similar music box. Unfortunately, all the shops had already put their Christmas goods back into storage and it wasn't until February that he found a wholesaler who was still selling music boxes. The catch, however, was that Wilhelm had to buy at least ten of them! He decided to buy all ten, and gave a music box to his American friends, who were extremely happy with their post-Christmas present. At their suggestion, Wilhelm went from house to house in the American barracks to sell the other nine music boxes. He was successful at first until the military police took him into custody, because door-to-door selling was not allowed. His good fortune was that the military policemen also liked the music boxes and recommended to him to sell them to the American officer's wives at the charity bazaars. From then on, Wilhelm and Käthe were at every weekend bazaar, with a gradually expanding range of products. And then in 1964, they finally dared to make the leap into independence.

At this time, Wilhelm Wohlfahrt was still employed by a well-known computer manufacturer, so his wife Käthe Wohlfahrt gave her name to the new company. Business was going well and soon Wilhelm and Käthe were able to welcome the first customers to their own showrooms in Herrenberg near Stuttgart. They then moved to Rothenburg ob der Tauber, a milestone in the company's history. Here, on Herrngasse in 1977, the first specialty shop for Christmas items opened – Käthe Wohlfahrt's Christkindlmarkt. And, of course, the extensive range of Christmas music boxes from the Erzgebirge also included a successor model of the Nativity music box that Wilhelm Wohlfahrt had given to his American friends. Since then, Käthe Wohlfahrt has opened more Christmas shops, including the world-renowned Christmas Village in Rothenburg ob der Tauber. The town also became the location of the company's headquarters. Since 1991 the company has been developing its own product lines under the name Rothenburger Weihnachtswerkstatt. In an effort to preserve Christmas traditions, The Christmas Museum was opened next to the Christmas Village in 2001. Here, interested visitors from all over the world can see a beautiful and well preserved presentation of the history of German Christmas. 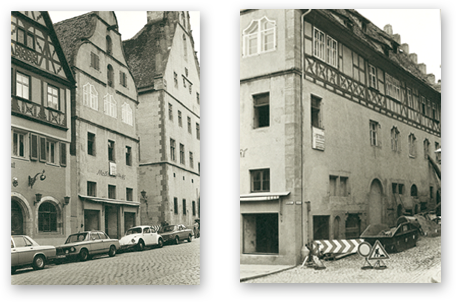 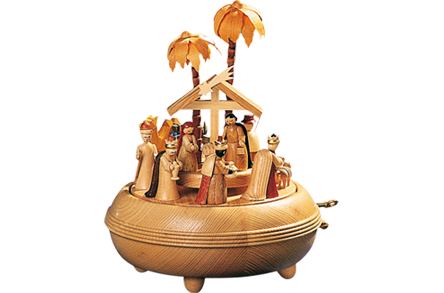 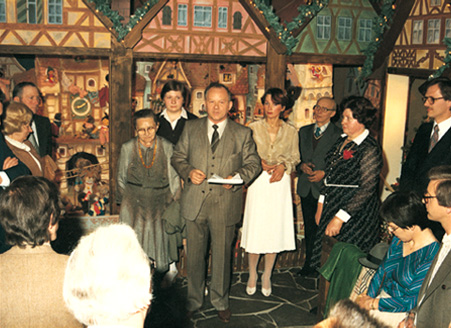 The music box that started in all
Christmas 1963

Opening of the Christmas Village in 1981 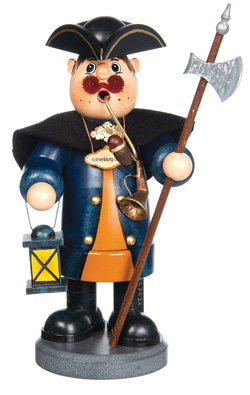 In the years before the dawn of the 20th century, the night watchman was one of many citizens of Rothenburg responsible for the safety of the inhabitants of this walled, fortified city. His job was dangerous, because he had to guard the city at night like a policeman. The people that he met on the streets were the drunks and the thieves. To protect himself and to show his authority he carried an intimidating weapon called a hellebarde.

The night watchman made his rounds from nine in the evening until three in the morning, relying on the town hall clock to tell him when to sing his "Hour Song," which reminded the people who slumbered safe in their houses that he was still alive and taking care of them.

The night watchman's horn, carried on a chain around his neck, warned the citizens of fire--the worst possible disaster that could strike a city in the days before fire hydrants. Keeping watch over the streets of the inner city, lighting the lanterns and announcing the hours in the still of the night were the duties of Rothenburg's night watchman. There were six of these men patrolling the city up to the year 1920. Today, the Night Watchman still appears at dusk in front of the Town Hall, on Market Square to guide the town's visitors through the romantic alleys and pathways sharing stories of Rothenburg's past. 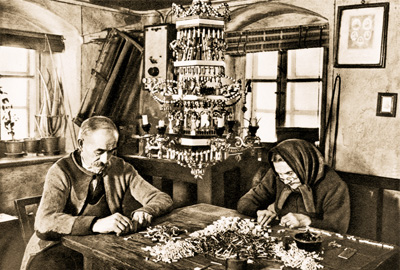 The supplies of silver, pewter, copper and lead were almost exhausted towards the end of the 18th century, leaving miners with the need for different work. As wood was a plentiful resource at the time, they focused on developing the skill of wood-turning. They became artisans of the craft, and we have been beneficiaries of their gifts ever since.

Many families in Germany consider the Pickle ornament a special decoration when the fir tree was decorated on Christmas Eve. The pickle was always the last ornament to be hung on the Christmas tree, with the parents hiding it in the green boughs among the other ornaments. When the children were allowed to view the tree for the first time, whoever found the special pickle ornament would receive an extra gift left by St. Nicholas for being the most observant child. 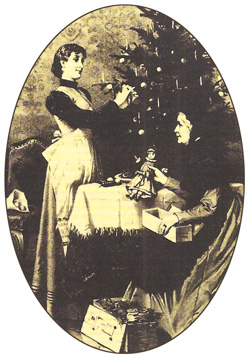 In medieval times the evergreen tree was said to be the Tree of Knowledge. On its branches were hung apples as a symbol of Man's fall from grace and communion wafers to represent his salvation. But the Christmas tree as we know it today took form during the time of the Reformation in northern Europe. In the city of Strasbourg in 1605, a visitor was impressed to see in a family parlor a fir tree which was decorated. In wealthier homes it was common for each family member to have a tree of their own.

It was during the 1800's that the Christmas tree with its decorations began to spread over much of Europe and across the Atlantic Ocean. Often a royal marriage brought the Christmas tree to a new land. In German tradition the tree is decorated Christmas Eve after the children go to bed.

Soon the toy-makers of the Nuremberg, the glassblowers of Lauscha, the woodworkers of the Erzgebirge, and the craftsmen of dozen Alpine villages found themselves hard at work to keep up with the new demand for ornaments. 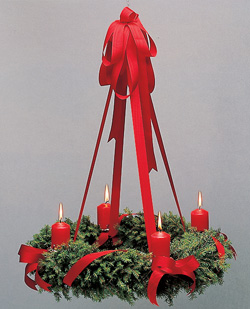 The Advent Wreath is displayed in churches and homes, a tradition of short history that started over 100 years ago in Hamburg. At that time, many orphaned children roamed the streets, begging for food. The protestant priest, Johann Heinrich Wichert, attended to these homeless children in the "Rauhe Haus", established in 1833, where he held an Advent service each year and introduced the concepts of Advent Christmas to them.

He conducted a candle service, "Kerzenandacht", everyday for 24 days before Christmas. During that time one of the 24 candles on a large hanging wooden hoop was lit every day until all the 24 candles were aglow. The children decorated the hoop with fir twigs as a symbol for life. That custom grew popular among adults, who then adopted the practice in their homes. They simplified it by reducing the number of candles to four, representing the four Sundays before Christmas. 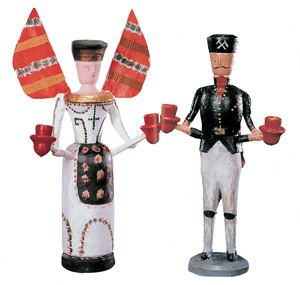 Another legacy from the time of mining in Erzgebirge is the placement of Angel and Miner candle-holders near windows at Christmas time. For the miner, light symbolized life, and thus, held a special significance.

The guardian angel was there to watch over him and to keep him safe. It was not until 1900 that the first of these figures were available for purchase in stores and markets. Today, windows are aglow as candle-bearing figures stand in to represent the number of sons and daughters within a family. 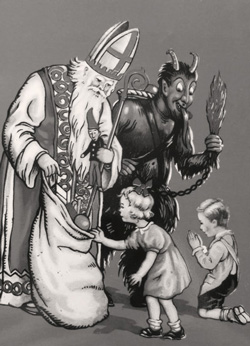 Originating in Germanic folklore as early as the 1600s, Knight Rupert or "Krampus" is believed to be a beastly creature who accompanies St. Nicholas on his earthly journey. While St. Nicholas rewards the good children with gifts and sweets, Krampus dispenses punishment to the wicked children who have strayed from the path of good. It is said he takes care of St. Nick's "naughty list." The mere sight of Krampus alone is enough to turn any wrong-doer toward more peaceful pursuits.